–
CLEANTECHNICA.COM — S&P Global reports the cost of solar with battery backup dropped precipitously in 2018. In a few cases in the sunny Southwest region of the United States, several tenders for solar plus storage came in at under $30 per megawatt-hour last year. Stand alone prices for installed battery storage — based on a 20 megawatt-hour system with 4 hours of storage — dropped 40% from the previous year to $357 per kilowatt-hour and are expected to keep falling. Bloomberg New Energy Finance projects a further 52% reduction by 2030. 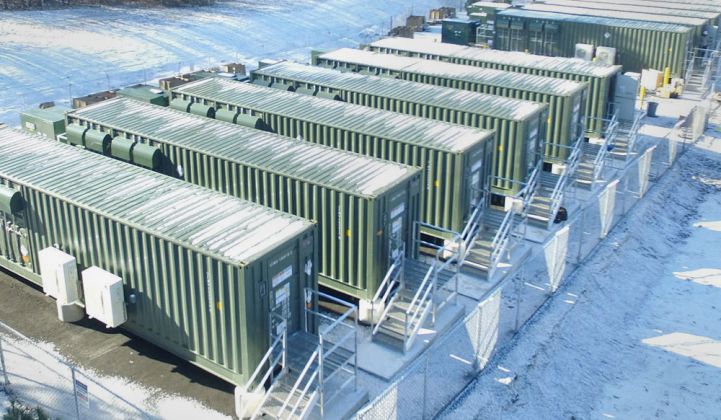 Such tumbling prices have led Wood Mackenzie to forecast that as the market for solar plus storage matures, it could put more than 6,400 MW of new natural gas-fired peaking capacity in the US at risk by 2027. “I can beat a gas peaker anywhere in the country today with a solar-plus-storage power plant,” says Tom Buttgenbach, CEO of developer 8minutenergy Renewables. “Who in their right mind today would build a new gas peaker? We are a factor of two cheaper.”

Progress in battery storage was uneven around the world last year. South Korea has put significant incentives in place, which have led to a boom in that country. So much so, in fact, that Korean battery manufacturers have dedicated much of their production to meeting that demand at the expense of automakers hungry for EV batteries and residential storage products.

“When you see projects now being planned at over 1 GWh in scale, when only 18 months ago a 300 MWh installation was something to behold, you know you have entered a new era,” says Simon Moores, managing director of Benchmark Mineral Intelligence.. “It has been quite interesting to watch the battery makers’ dilemma of where to send the lithium ion cells. Of course they have contracts to honor with automotive producers, but the order inquiries from [energy storage] producers have been incredible.”

Some CleanTechnica readers have been wondering why Kia and Hyundai have such low production targets for their newest EV offerings. The clamor for battery cells to meet the energy storage demand may be part of the reason for those low numbers.

“Even though progress was uneven, there was a much greater consensus in 2018 over the importance of energy storage, even in the near term, in major markets,” says Logan Goldie-Scot, head of energy storage at Bloomberg NEF. “In 2017, there were still a lot of people talking about how energy storage was not necessarily a competitive solution and was going to be limited. I hear those conversations much less now. Energy storage is now becoming more integrated into resource plans.”

One of the points opponents of Arizona’s proposed renewable energy mandate kept hammering on was how renewable energy was unreliable because the sun sets every evening right when the demand for electricity peaks and winds don’t always blow. The cost of energy storage would send the cost of electricity soaring, they said, forcing the people of Arizona to shell out hundreds of dollars more each year to power their homes.

The advocates for renewable energy may have made a tactical blunder by proposing an amendment to the state’s constitution rather than choosing another avenue to accomplish their goal, but there is no question the opposition — funded largely by the state’s principal utility company — were outright lying.

The majority of voters in Arizona bought the lies. In the battle of new versus old technology, the best option doesn’t always win — at least not at first. But ultimately, the imperative of lower prices will carry the day.